A big cheer goes out to Peter and Dan who were the only ETT'ers who tackled the individual challenge that was 'The Dog Days of Summer!'

What did they do you may ask? They rowed the amounts stated below over the month of August:

Nice job there guys - you will be primed for the next team challenge on the 15th September!
Posted by Caroline at 18:54 No comments:

Next months Cross Team Challenge has been set by Rote87.
It is a short sharp interval session:

3 x 300 metres with 3 minutes rest
First interval from a stopped flywheel, the remaining two intervals can be from rolling starts.

The new season Challenge Series also starts in September.
Round one is the classic 4 minute O'Neill test.

The Fall Team Challenge starts on the 15th September until 15th October and it's easy to sign up.
Log on to your on-line logbook and go to the 'Team' tab and click the highlighted challenge to join.

I have to admit I forgot to remind you all about the August individual challenge the 'Dog Days of Summer' follow this link to read all about it http://log.concept2.com/challenge/events/dogdays.asp

There's also another individual challenge, the Pararowlympics,  that runs from the 29th August - 9th September to celebrate the Paralympics 2012, follow this link to find out the details http://log.concept2.com/challenge/events/specialevent.asp

For those of you in the UK, I hope you all had a great Bank Holiday!
Posted by Caroline at 22:59 No comments:

Boat one floated in Aug CTC

Excellent news team mates, we have floated the first boat into the August Cross Team Challenge thanks to Mark and John. With 17 more days in the month let's aim to get another boat floated soon.

What did you think of the waterfall challenge folks?

If you haven't already given it a go - it's quite good fun and you don't get wet (apart from the sweat of course)!

Here are the results I know you have all been so eager to find out.....

Congratulations to all ETT athletes who took part in the Rowlympics 2012.
See you in Rio 2016!

Posted by Caroline at 22:04 No comments:

Ric was the first out of the blocks with his impressive 10.11 minute set, then two more ETT'ers were inspired by the amazing feats of Ric (and the Olympic athletes) and have rowed this months Cross Team Challenge.
It was chosen by the C2 UK forum and is an interesting interval session of 1500m, 800m, 400m, 200m, 100m with 2 minutes rest between each set.
Upload the time it takes for the 3000 metres excluding rest times.


Two heavyweight's needed to float Boat one into the rankings.
Posted by Caroline at 22:16 No comments:

Congratulations to the eight dedicated ETT athletes who have gained virtual medals in the C2 Rowlympics.
To qualify for medals you need to row set amounts between the 27th July - 12th August.

Hockey at the Olympic Park

A friend had a spare ticket to the Men's Hockey on Tuesday night at the Riverside stadium in the Olympic Park so I jumped at the chance to go. We were lucky enough to get to see Team GB v Spain and New Zealand v Germany.
It was a qualifying match and Team GB got through to the semi finals with a draw of 2-2 and New Zealand smashed Germany 4-2. The atmosphere was excellent even though it was raining off and on throughout the match, I think we were the most enthusiastic supporters in the stadium and the surrounding fans soon got into the spirit of things with a few songs and cheers. 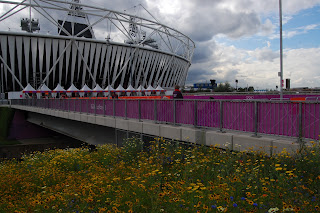 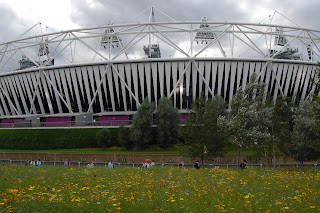 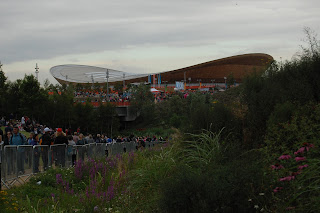 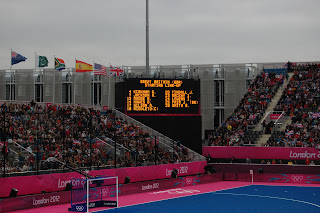 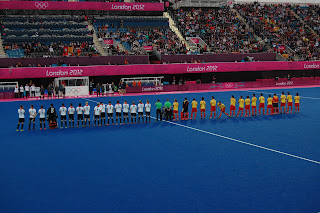 Posted by Caroline at 14:40 No comments:

Chris and I met up with fellow team mate Edward Jackson (the fastest ETT'er in the 6k July CTC) in Putney this morning to have a catch-up, a bite to eat and watch Team GB in the rowing events.


We found a big screen at the Duke's Head pub on the River Thames and watched the men's four, the lightweight women's double and finally the lightweight men's double. The pub was very quiet - in fact at 11:30 it wasn't officially open, yet they kindly let us in and put the plasma and sound on so we could watch the races. We had the place to ourselves for about 45 minutes until other locals turned up  to create more of an atmosphere.

The races were brilliant! The men's four lead the race from the start. Andy Triggs Hodge, Pete Reed, Andy Gregory and Tom James finished the 2,000 metres in style with Gold.

Next was the lightweight women's double with Sophie Hoskins and Kat Copeland who annihilated the competition right from the start and comfortably secured their first place position.

Lastly we saw the lightweight men's double with Zak Purchase and Mark Hunter. They had an unlucky start with a faulty seat In the first 100 metres of the race which caused a re-start. In the second round of the race Purchase and Hunter stormed through the first 1000 metres in first place, unfortunately with only 150 metres left of the race Denmark went into turbo drive and stormed past Team GB forcing them into second place.

Overall three fantastic races with two Gold medals and one Silver medal for Team GB and also great company from Edward J too!
Posted by Caroline at 17:27 No comments:

Three ETT team mates have received a virtual Bronze medal in the 2012 Rowlympics:

See how your country is doing by following this link:

http://log.concept2.com/challenge/rowlympics/medalcountbycountry.asp?order=total
Posted by Caroline at 21:29 No comments:

For those of you who have been following the London 2012 Olympics, Team GB pulled in some impressive sporting achievements today - akin to the daily toil of our own ETT team mates. This should inspire us to train harder and achieve our own PB's during the 2013 indoor rowing season - Come on Team ETT, you can do it!

Rowers Helen Glover and Heather Stanning won Team GB's first Gold medal of the London 2012 Olympics with a time of 7:27.13 for 2,000 metres - Talk about fast! They are the first female rowers to be awarded a medal in Olympic history.

On Saturday, Chris and I saw the cycling road race for a milli-second when it blazed through Putney High Street. Unfortunately we didn't get to see the awesome work of Bradley Wiggins and Chris Froome at Hampton Court today who cycled into Gold and Bronze medals respectively.

We floated one boat thanks to the following ETT athletes who made the Olympian effort to row a 6k for the July Cross Team Challenge: 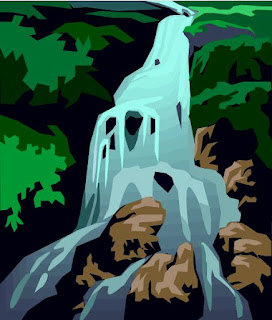 The August Cross Team Challenge has been set by the UK C2 Forum.

It's a waterfall workout with 2 minutes rest between every repetition.

Second and subsequent reps MUST be from a standing start.

There are no rate restrictions.

Record your total time for 3000m (do not include the rest time).
Posted by Caroline at 20:52 No comments: