Unfortunately for the first time since December 2010 we haven't floated a boat in this month's Cross Team Challenge.
The following three teams mates tackled the interval session of five intervals of 1402 metres with two minutes and twenty seconds rest between each rep.
Posted by Caroline at 21:40 2 comments: 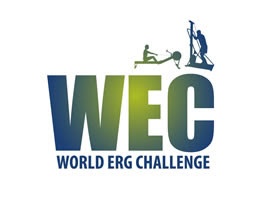 The World Erg Challenge 2012 is now open. Go to the team tab on your online logbook and click the yellow section to join the rest of the team.
Chris, Ric and myself are already raring to go!
The team challenge starts on the 15th March until the 15th April 2012.
Posted by Caroline at 21:20 No comments:

David J and John G have been very lonely in their boat for the past month.
We need some ETT'ers to rise to the Cross Team Challenge of five intervals of 1402 metres with two minutes and twenty seconds rest between each rep.
I am planning on tackling this interval session this weekend, who's with me?
Posted by Caroline at 17:54 No comments:

Come and join Mark, Chris, Edward, Ric, Del and myself at the BIRC.
Tomorrow 09:00 am is the deadline for signing up for the British (and European) Indoor Rowing Championships in Nottingham on 25th March 2012.
Follow this link to enter birc
Don't forget to put Empty the Tanks as your affiliated team!
Hope to see some more ETT'ers there.
Posted by Caroline at 18:12 No comments:

Saturday 18th February
The build up to the race at the competition was intensified at the team meeting on Saturday by Kim (Team GB manager) and Pete Marsden (Team GB Coach) who set the scene for those who had not been to the World Indoor Rowing Championships before.
We then ate a very generous plate of food (or couple of plates in Chris' case) at the competitors lunch. We were sat on a table of mainly lightweight rowers including another Chris (Wheatley) who found the pile of cakes and brownies calling him - but he was strong and resisted. We mingled with the rest of Team GB and listened to speeches from various US bigwigs from Concept 2.
After the C2 competitors lunch we met up Tim a mate (Chris' ex work colleague) who lives in Boston for a whizz around on bikes. 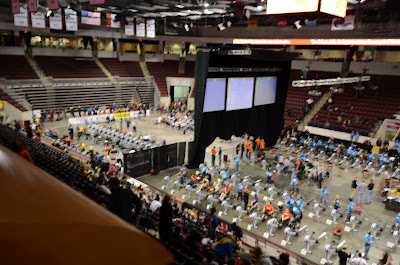 Sunday 19th February - Race Day
We had another early race so Chris and I set the alarm for 06:00 got up and started the preparation for the race at 10:10. I had an early breakfast but Chris held back until after the weigh-in at the Agganis Arena. We took a taxi to the venue so we had plenty of time to get warmed up and the chance for Chris to eat some fuel before his race.
The Agganis Arena do not let any outside food or drink into the venue (they confiscate it during the bag search if they spot it) so Chris and I made sure we had hidden our oats, sweet potatoes and chocolate in our bags.
Our warm up was OK making sure we followed the Eddie Fletcher recommended 20 minute workout that includes short sprints, UT1 and UT2 rates to prepare our bodies for the intense 2k to come.
Unfortunately, I haven't got any photos of our 2k races for the blog because we were both racing at the same time, although we have some video footage which I will upload soon.
I started the race with a plan of 2:08, 2:09, 2:09 and to finish with another 2:08. I started well and the first 1,000 metres I was on target (pretty much) but in the third and final quarter I noticed a couple of 2:12 and 2:13 paces popping up on the screen and despite what I felt like a huge effort my pace didn't seem to shift much beyond that in the last section of the 2k.
I pulled in a time of 08:44.9 which I was not very pleased with considering my 08:37.3 PB last Sunday. It was a worst than my 2011 WIRC time of 08:40.5. I finished 12th out of 16 30-39 Lwt females (which isn't too bad). I had a great time in Boston and I suppose I can learn from this and reassess my training program for the BIRC at the end of March 2012.
The photo below shows me ranked in 11th position. The list changed later in the day because it turns out that Jen Hause of Team GB was 10 metres away from getting the Gold medal when her C2 monitor packed in and she lost all her race information. The officials said that she could race again later in the day, which she did and pulled in an impressive time of 7:22.4, knocking Nell S into Silver medal position. 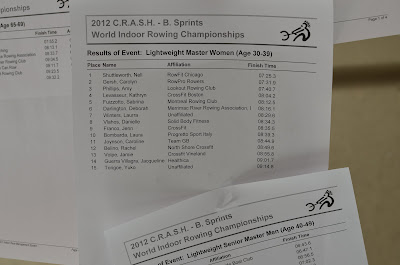 Chris said his race was a €#%$¥ car crash. Things didn't get off to a good start when his cox, Tim arrived one minute before the start time of the race still drunk from the night before warning Chris he could be sick at any moment. Tim got regularly distracted by chatting up the fellow female coxes and not keeping his eye on Chris. To keep things fresh (for Tim) he started to make up times and positions just as Chris was entering the last 1k of the race. Chris finished just short of a sub 7 with 7:02.3 and came in 4th position out of 14 rowers in the 40-49 Lwt male rowers.
Follow this link to see Chris and Tim in the background of one of the official C2 photos. 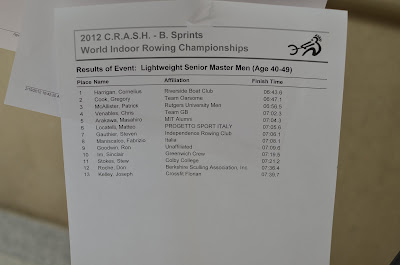 After such early races it meant we had a reasonable amount of time to kill before our flight. We had a brilliant meal of fresh fish in Legal Seafood and managed to relax for a bit before heading back to the hotel to pick up our bags for the airport.
Posted by Caroline at 20:52 2 comments:

Follow this link on Sunday at 15:10 (UK time, 10:10 Boston time) to watch Chris and I compete in our races. Unfortunately we are timetabled to race at the same time, so you will have to switch between the two races.

Chris and I landed safely in Boston last night and shared the flight with over 16 Royal Navy guys who are rowing for Team GB with us at the Crash B's this Sunday.
The weather is a lot milder than last year so walking around the city will be more of a leisurely activity rather than a dash from place to place like last year due to the freezing temperatures.
I will keep you posted about events this weekend - we are attending a Team GB meeting at the Sonesta Hotel on Saturday followed by a competitors lunch which is a great event attended by all the competitors of the Crash B's from around the world. Last year I was very jealous of the bright green kit of Team Brazil - we have blue Team GB t-shirts which we will all be wearing on Saturday.
For those of you who are going to the British Indoor Rowing Championships in five weeks time - hope your training is going well.
Posted by Caroline at 12:50 No comments: 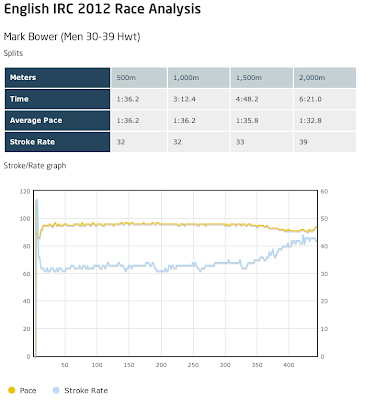 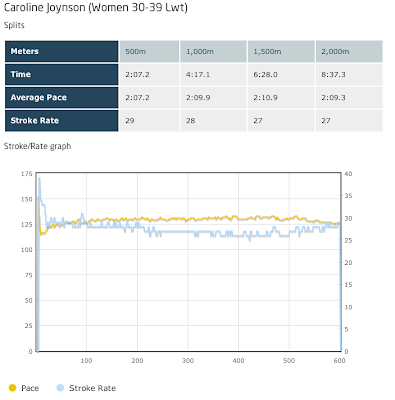 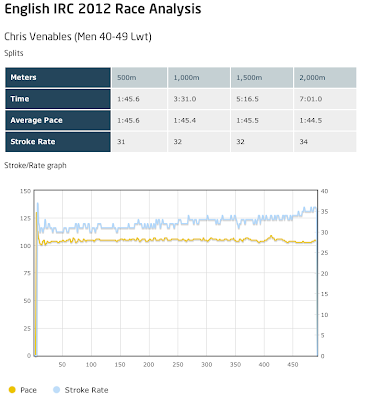 Did you row 14k for your loved one?
There is still a chance you could qualify to download a special C2 Valentine's card for that special person in your life.
Upload your metres now!
Posted by Caroline at 18:12 No comments: 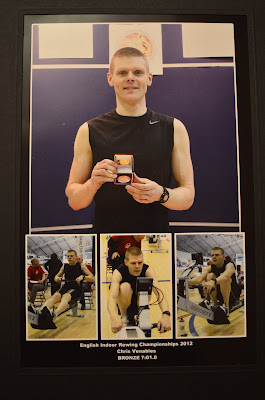 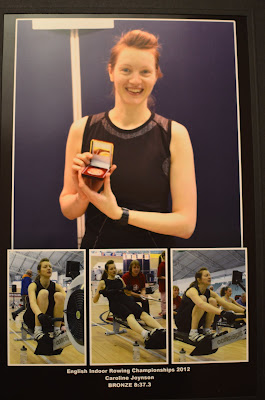 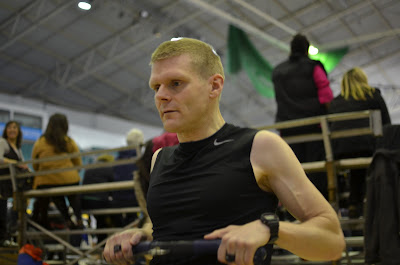 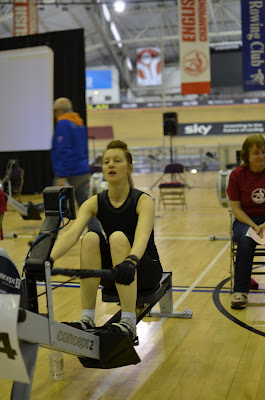 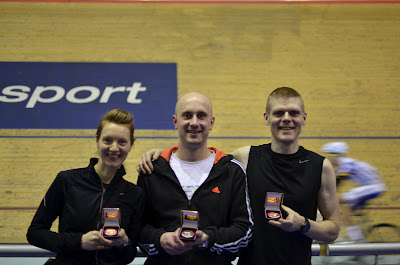 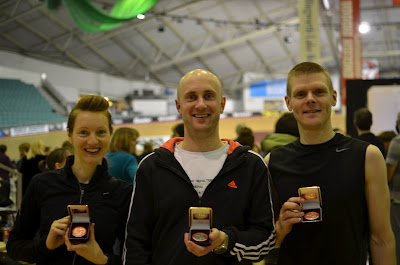 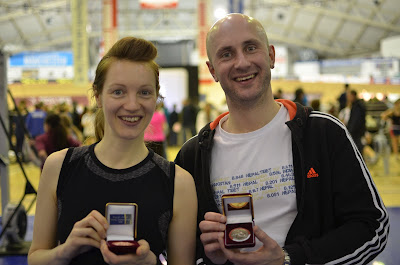 After an early start for everybody who competed today in Manchester it was a great day all round.
Chris and I got up at 05:00 for the journey from London to Manchester hoping to catch Mark's 09:30 row but we realised we had missed it when we found him recovering on the floor in the corridor of the Velodrome with a face as red as his top! Mark had a storming row and he pulled an impressive PB of 06:21 and got a Silver medal for all his hard work. Read more about his 2k on Mark's Rowing Blog (link at the right hand side of my page).
I was late for my weigh in and there was a moment where it looked like I may not be able to officially race as a lightweight but luckily I was OK. I had a quick 20 minute warm up and then it was 10:30 and I was sat on erg 14 staring at the race countdown. I had an unevenly split race but I still managed to get my best ever time of 08:37.3. I didn't realise it during the race but I was .3 seconds away from a Silver medal - I nearly missed my bronze medal ceremony because I was getting a post-race massage.
Chris was the last of the ETT'ers to race and he had a different race tactic to Mark and myself. He switched the race computer to the wattage setting and aimed to keep his power above 300 watts for the duration of the race. It paid off because Chris got a bronze medal for his 07:01.0 time.
We met a great guy called John (LWT 20-29) who was competing for the first time. We chatted to him for quite a bit before his race and gave him some tips about what to expect on a race day. He went on to get a Gold medal in his category with 06:33.1. Let's hope he joins the ETT'ers!
A brilliant day all round, it's a good barometer for what to expect at the BIRC in March. Also a time for Chris and myself to aim for in Boston at the Crash B's next Sunday.
Posted by Caroline at 19:32 2 comments:

At least 3 ETT team mates are competing in the English Indoor Rowing Championships in Manchester next Sunday.
The race schedule looks like this:
09:30 Mark 30-39 Hwt Male
10:30 Caroline 30-39 Lwt Female
13:10 Chris 40-49 Lwt Male
Has anybody else entered? If so, let me know so I can look out for you in the Velodrome.
Wish us luck!
Posted by Caroline at 16:21 6 comments: