The Cross Team Challenge for March is very interesting. It has been set by the Almhult International Rowing Club (AIRC) from Sweden.

4 x distance intervals of your choosing but they must add up 4000 metres.
3 x 2 minute rests in between the intervals.
First interval from a standing start.

After reading the C2 UK forum these are some suggested options:
Has anybody else got any good suggestions?
Posted by Caroline at 14:59 2 comments:

If you want to get involved in the March Madness Individual Challenge it is very easy - just row over 5,000 metres for 25 days out of the month. If you meet the challenge you will earn yourself a delightful certificate and a mention on the Honours Board. It all kicks off on Tuesday 1st March until Thursday 31st March.

This challenge will be running at the same time as the World Erg Challenge (15th March - 15th April), so a lot of you will automatically do the March Madness Challenge without making a special effort to get involved.
Posted by Caroline at 14:44 No comments:

We are happy to welcome Edward J, 57 from the UK and Justin C, 36 from Australia to the team. They are very keen because they have already signed up for the World Erg Competition - excellent stuff.
Posted by Caroline at 14:34 No comments:

Only 2 days left of the Feb CTC

This is a call out to all the ladies in Empty the Tanks - we need a girl to row the 30 minute Cross Team Challenge so we can float boat 2 in the rankings.

Well done to the following team mates have risen to the challenge:

Chris and I had to be at the Agganis Arena two hours before our race to give us enough time to weigh in, have a look around the stalls and warm up with some stretching and a decent row.
We met up with Tim B who is a friend from the UK who lives in Boston - he decided to help by coxing for both of us.

I raced at 14:30 on the front row of the arena in the same location as last year. I was flanked either side by women from Team Mexico - they looked like they meant business in their black and green outfits. My aim for this race was to try to take my pace down from 2:12.4 (BIRC) to 2:11.0 throughout the 2k so I could beat my PB of 08:46.7. The race began and I quickly settled into a 2:11 pace - I was concentrating on keeping my stroke down under 30 spm so I wasn't wasting energy. The two Mexican women either side of me were doing something like 40 spm and I felt strong and controlled throughout my 2k just doing my own thing.

Coming up to the last 500 metres everything was hurting but I made a massive effort to keep within my stroke rate boundaries and kick out more power with the thighs. With help from the proffesional cox and Tim shouting "Come on Cazza" I pulled in my best ever time of 08:40.5. I finished 6th out of 10 Lightweight Master Women aged 30 - 39. I was very happy with my row. My next challenge is to go sub 08:30.

Chris raced 15 minutes later with Tim coxing armed with a whole bunch of unmentionable words of encouragement to motivate him. Chris pulled in an impresive time of 07:00.3 (he was gutted to miss out on a sub 7). He ranked 8th out of 11 Lightweight Senior Master Men aged 40 - 49.

We both really enjoyed this year's World Indoor Rowing Championships and felt part of Team GB because of the organisation of Kim and Pete (C2 Forum regulars) who e-mailed everybody with information, tips and advice before the event. During the Race day the majority of UK rowers all sat in the same part of the arena acompanied by a huge Union Jack and Royal Navy flag - it was good to share pre and post race stories with people who knew what you were going through.

Looking forward to WIRC 2012 - especially because there won't be a British Indoor Rowing Championship in 2011. Hope to see some of you there - start saving now.

Empty the Tanks in Boston, USA 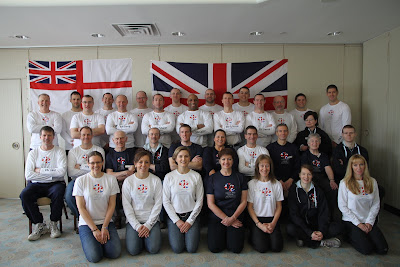 Chris and I are representing Empty the Tanks and Team GB (along with 30 others from the UK) in Boston for the World Indoor Rowing Championships (also known as the Crash B's) on Sunday 20th February.
We had a rather interesting journey last night because as we were descending into Logan airport in Boston there was a huge bang and a flash on the plane. It was only when we landed safely we were informed by the pilot that our plane had been struck by lightening - it was a very surreal and slightly scary experience.
We attended the Team GB meeting at the Sonesta Hotel this morning to get briefed about what to expect at the Competition tomorrow. The majority of Team GB consists of about 20 Royal Navy rowers of all shapes, weights and ages - I imagine they will make a great cheering squad for all of the UK competitors during our races tomorrow.
After the Team GB talk a fantastic lunch was provided by Concept 2 for all international competitors which was brilliant. Lots of good quality food (fuel) buffet style was available then there were a number of speeches by the Crash B organisers - it was a great event.
The race is going out live on a webcast tomorrow, so you can check out the action. Follow this link:
www.concept2.com/us/racing/crashb/
Caroline Joynson - Master Women lightweight 30-39 - erg 3 at 14:30 (USA) 19:30 (UK)
Chris Venables - Senior Men lightweight 40-49 - erg 17 at 14:45 (USA) 19:45 (UK)
Posted by Caroline at 22:35 No comments:

The JVTC may still be too fresh in your memories to want to put yourself through another team challenge but........ the World Erg Challenge (previously the World Rowing Challenge) is open for business. It doesn't start until the 15th March until the 15th April 2011, so there is plenty of time to persuade friends, family and work mates to get involved.
We need to regain our rightful top ten position this time around.
Posted by Caroline at 20:40 No comments:

It is the fourth anniversary of when Carole McNally sadly lost her fight against cancer.
This is a one day event on 14th Feb when we all row 1402m and record our best time for that distance.
http://c2ctc.com/
Posted by Caroline at 17:23 No comments: 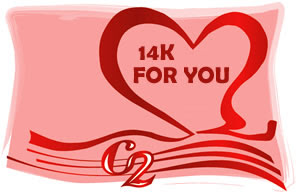 Congratulations to those who rowed over 14,000 metres between the 9th - 14th February for the Valentine's Challenge. The following team mates got their names listed on the Erg Lovers Honours Board:

For those sensitive souls out there - don't forget if you row 14,000 metres between the 9th - 14th February you get the chance to down-load a Valentine card for your loved one. You also get listed on the Erg Lovers Honours board.
Posted by Caroline at 22:35 No comments:

Quite a number of members have rowed the 30 minute session for the February Cross Team Challenge. We have 2 boats in the competition and have managed to get into the points rankings with Boat One because we have three heavyweight, one lightweight and one female rower. 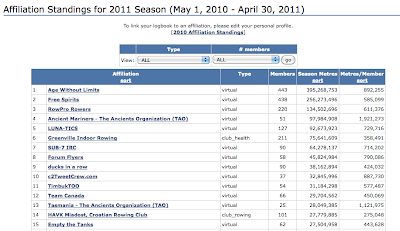 We are currently ranked in 15th place out of 1486 world-wide teams in the 2011 season affiliation rankings.
Posted by Caroline at 17:08 3 comments:

Ric (a friend of Mark B) has joined the team and has already thrown himself into the spirit of things by rowing this months 30 minute Cross Team Challenge with a very respectable 7758 metres. Welcome to Empty the Tanks.

After only a couple of days rest, Mick and Mark have also competed in this months CTC.

Posted by Caroline at 16:33 No comments: